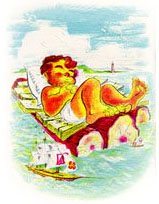 Paul's Cradle In The Deep

Paul's clothing was so large they had to use wagon wheels for buttons. They used a lumber wagon drawn by a team of oxen as a baby carriage. When he outgrew this his parents put him on a raft off the coast of Maine.
It is said that rocking in his sleep he caused huge waves which sunk many ships.

He would eat forty bowls of porridge just to whet his appetite.