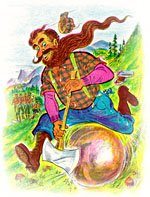 Paul liked to work with big men. The most famous were his seven axemen. They were all named Elmer, so when he called they all came running. No grindstone was large enough to grind the axes so they sharpened them by holding them against large stones rolling down hill.
Each of these men was over six feet tall sitting down and weighed over 300 pounds.