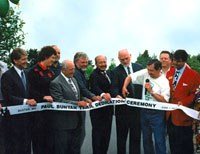 In October 1992, the first 50 miles of the multi-use, recreational Paul Bunyan Trail (from Brainerd/Baxter to Hackensack, MN) was paved with asphalt and opened.

Since its opening, an additional 70 miles have been paved; the total trail length is currently 120 miles. Creation of the Paul Bunyan Trail, named after the legendary logger, required a Bunyan-sized effort. Construction and paving of the trail is the longest paving project undertaken by the Minnesota Department of Natural Resources under one contract.

The trail pathway follows the original railroad line built in 1893 by Burlington Northern and abandoned in 1983. It is now among the longest paved "Rails to Trails" in the nation. The Paul Bunyan Trail now ultimately links 16 communities between its source in Brainerd/ Baxter, and Lake Bemidji State Park on the north. It is non-motorized, except for snowmobiles. Uses of the Paul Bunyan Trail include bicycling, hiking, in-line skating, and it is fully accessible for persons with disabilities. The Paul Bunyan Trail showcases area pine forests, sparkling lakes, colorful wildflowers and wildlife. The user will pass along the shorelines of countless lakes, through scenic wetlands, and cross bridges over streams and rivers. Trail users will find lodging, dining and support services available at convenient locations and in all price ranges. Vehicle parking is available in each community along the trail. In Baxter, where the Paul Bunyan Trail begins, a temporary parking lot is located at the trailhead. Other lots are located in Merrifield, Pequot Lakes, Pine River and Backus.

Completed paving projects include the 2008 addition of the bridge over Excelsior Road crossing in Baxter, paving of the12 miles from Bemidji south to Guthrie, which was completed in the Spring of 2009. Paving continued in the Spring of 2010 on the stretch of trail from Guthrie south to Walker--yielding a continuously paved trail from Brainerd/Baxter north to Bemidji State Park.

Numerous projects along the trail are on-going and improvements are being made every day.

Thank you to Terry McGaughey for all photographs